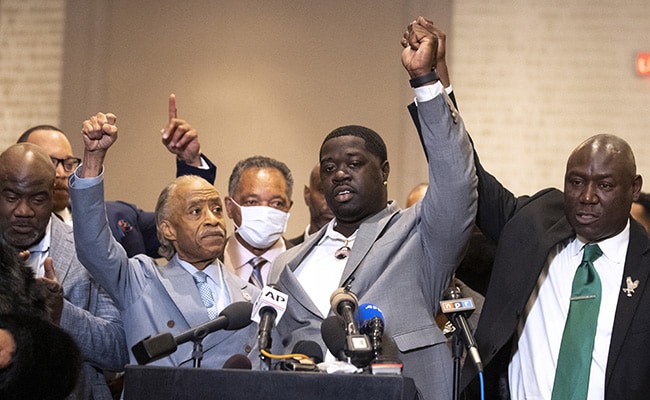 For the family of George Floyd, the murder conviction of the former police officer who killed him was a confirmation of something they knew but feared the justice system might never validate: that their loved one’s life mattered.

“Today, we are able to breathe again,” one of Floyd’s younger brothers, Philonise, said during a news conference in Minneapolis after the verdict was released. “Justice for George means freedom for all.”

After Derek Chauvin, who killed Floyd with a prolonged knee to the neck last year, was convicted of second-degree unintentional murder, third-degree murder and second-degree manslaughter, Floyd’s family members hugged each other tightly and shed tears of joy.

The sense of relief was palpable as the group gathered in a downtown Minneapolis hotel for a post-verdict news conference that doubled as a kind of spiritual revival with prayers, applause and spontaneous shouts of “Amen!”

“Say his name!” Floyd’s relatives chanted as they entered the room, fists raised in the air. “George Floyd!”

The moment came to represent the broader reaction throughout the Black community to the rare instance of a White police officer being found guilty of killing a person of color – a complicated mix of celebration, grief, exhaustion and determination. As family members and civil rights leaders such as the Rev. Al Sharpton and the Rev. Jesse Jackson spoke, activists took to the street holding “Black Lives Matter” signs and chanting Floyd’s name.

The Floyd family attorney, Ben Crump, cast the verdict as a critical moment in America’s troubled history of race, policing and criminal justice.

Mentioning the names of several other Black Americans killed by police – including some in the last three weeks – Crump promised to press on with the broader push for racial justice that was sparked by Floyd’s death.

Before the verdict, Philonise Floyd described to The Washington Post the responsibility he felt to do his part to get justice for his brother – and hopefully take a step toward broader societal change.

“I don’t want him to be another person on a T-shirt,” Philonise said.

Tuesday’s verdict made it clear how much Floyd’s death has resonated across the country.

As responses poured in from figures such as former president Barack Obama and local civil rights activists in Minneapolis, the verdict came as a validation of the Black Lives Matter movement that began several years ago and has expanded to find mainstream support in corporate America and Washington after videos capturing Floyd’s death went viral last year.

In a statement sending support to the Floyd family, Obama stated frankly that the country needed to “come to terms” with the prevalence of racism in its various systems, from policing to the economy.

“While today’s verdict may have been a necessary step on the road to progress, it was far from a sufficient one. We cannot rest,” the nation’s first Black president said. “We will need to follow through with the concrete reforms that will reduce and ultimately eliminate racial bias in our criminal justice system.”

Back in Minneapolis, Floyd’s loved ones quickly came to grips with the potential impact of the trial in which several police officers testified against one of their own and in defense of a Black man’s right to live.

Courteney Ross, Floyd’s girlfriend and a witness during the trial, welcomed the verdict as she took stock of how George Floyd’s life – and death – had reverberated.

“He changed my world. He changed our world,” she said in an interview after the verdict was announced. “He changed the world.”

Ross also addressed a large, joyous crowd outside the courthouse.

Saying that Minneapolis needed this moment, she asked people in the crowd to hold each other.

“This is a moment to celebrate,” she said, as some in the crowd linked arms.

Before the verdict was announced, Floyd’s family members gathered in a hotel conference room in downtown Minneapolis and braced themselves for what was to come. The rush of anticipation was the culmination of almost 11 months worth of emotions that have careened between sorrow, grief, anger, reminiscence, fear, stress and a constant feeling of anxiety.

To cope with the pre-verdict restlessness, Floyd’s siblings, aunts, uncles and other family members hugged each other, made small talk and tried to steady their nerves with stories about their loved one, said Angela Harrelson, Floyd’s aunt. Jackson, Sharpton and other civil rights leaders were also there, holding vigil with the family of the man whose killing sparked the largest racial justice movement since the 1960s.

“I’m just on pins and needles,” Harrelson said in an interview, describing the collective mood before the verdict was announced. “I don’t know what’s going to happen, good or bad. I’m so afraid.”

She said she was hiding out behind a staircase trying to avoid being spotted by reporters, in a location just minutes away from the courtroom where her nephew’s killer would soon learn his fate.

Floyd’s family was cast into the global spotlight almost immediately in the wake of his May 25, 2020, killing, as protests spread from Minneapolis to cities around the country and the globe. As some of the unrest turned violent and destructive, Floyd’s family members pleaded for calm and soon began receiving phone calls from top political figures, including President Donald Trump and President Joe Biden, then the Democratic nominee. After winning the November election, Biden continued to keep in touch with Floyd’s relatives.

The president told reporters Tuesday that he spoke with members of Floyd’s family ahead of the verdict, saying he could “only imagine the pressure and anxiety they’re feeling.” He underscored that he waited until the jury was sequestered to express his views on the case.

“They’re a good family,” Biden said earlier Tuesday. “And they’re calling for peace and tranquility no matter what that verdict is. I’m praying the verdict is the right verdict, which is – think it’s overwhelming, in my view.”

The family, which settled a civil suit with the city of Minneapolis for $27 million last month, now hopes to turn its full attention toward securing passage of federal legislation aimed at reducing police brutality and racism. The George Floyd Justice in Policing Act has passed the House but remains stalled in the Senate.

“The act has to be passed,” said Floyd’s brother, Rodney Floyd. “It has to be. We’re going to keep pressure on the Senate and everybody.”

“Today is a pivotal moment for America,” Floyd’s nephew, Brandon Williams, said. “It is something this country has needed for a long time now. And hopefully today is the start of it.”

The trial was particularly gutting for those who knew Floyd best. While dozens of witnesses and many hours of testimony dissected Floyd’s life and final moments, Floyd’s loved ones had to watch him die repeatedly from multiple angles as police body camera footage and bystander video documenting the 46-year-old’s killing surfaced as evidence.

Restrictions related to the coronavirus pandemic meant that only one family member was allowed in the courtroom at a time. Others watched silently on their televisions, grimacing as Chauvin’s defense team sought to highlight Floyd’s drug use and medical issues.

“It was just re-triggering, it was trauma,” Harrelson said moments before the verdict was announced.

Minnesota Attorney General Keith Ellison, a Democrat, was among several top officials who acknowledged Floyd’s family in the aftermath of the verdict.

“Over the last year, the family of George Floyd had to relive again and again the worst day of their lives – when they lost their brother, their father, their friend,” Ellison said during a news conference Tuesday. “They have shown the world what grace and class and courage really look like.”

Behind the scenes, it has not been easy.

Philonise Floyd, who fought to hold back tears on the witness stand after telling the jury about his brother’s love for his mother, let them flow during the second week of the trial when the medical examiner provided graphic details about George Floyd’s body at the time of his death.

“I could not stop crying,” Philonise recalled. “It was too much.”

Before the trial began, Harrelson said she had to stop answering her phone, due to the deluge of white supremacist hate messages she had been receiving and the stress of the case.

As Floyd’s only family member who lived in Minneapolis full time, she said the burden of the trial was especially trying as she balanced managing her own emotions and the tensions gripping her hometown.

“It’s hard at times,” she said earlier this month as the trial was taking place.

But the verdict has energized many of the family members to seek to carry on his legacy by helping families get justice for their loved ones in other cases where police have used deadly force.

“We were able to win this round, but it is still one round,” Philonise Floyd told The Post, mentioning other families currently going through what his family has experienced in the last year. “We are going to the next round and the next round to win the fight.”

The Washington Post’s Silvia Foster-Frau contributed to this report.

“True Justice Is About Much More Than A Single Verdict”: Barack Obama On Ex-Cop Conviction