Russia To Sell Soyuz Space Module Used By Astronauts In 2018

Russia To Sell Soyuz Space Module Used By Astronauts In 2018 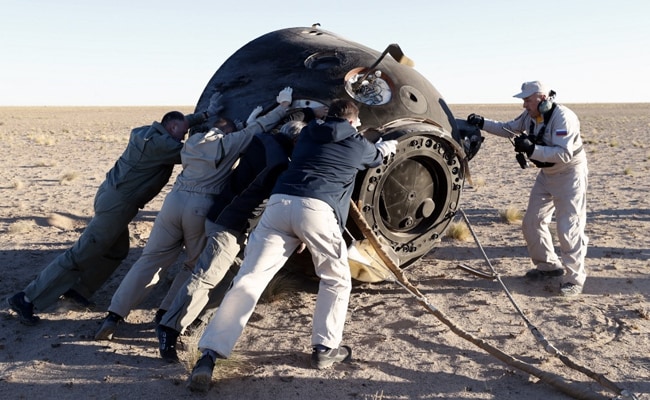 A statement said the lander is available on the Glavcosmos web portal for purchase.

Russia has put up for sale one of its space modules, which in 2018 returned a Russian and two Americans from the International Space Station (ISS).

“Descent module No. 738 of the Soyuz MS-08 mission is available on the Glavcosmos web portal for purchase,” read a statement issued late Tuesday by Glavkosmos, a subsidiary of Russia’s Roscosmos space agency.

“This lander can become an excellent exhibition showpiece for any public or private exhibition dedicated to aerospace,” the statement added.

Glavcosmos spokesman Yevgeny Kolomiyev told AFP that the price of the descent module was not being publically disclosed because it was a “trade secret” and that prospective buyers would need to submit requests through the agency’s website.

In October the same year, its decent module, which is up for grabs, returned Artemyev, Faustale and Arnold to Earth landing in Kazakhstan.

Glavcosmos director Dmitry Loskutov told the RIA Novosti news agency he did not rule out in the future selling “other shuttles, once their mission is completed”.

Moscow is seeking to boost its embattled space programme, which has stagnated since the collapse of the Soviet Union and has been facing stiff competition from US-based tech billionaire Elon Musk’s company SpaceX.

Russia said earlier this month it would send an actress and a director into space to make the first feature film in the cosmos and also deliver an eccentric Japanese billionaire to the ISS.

Russia’s space industry has suffered a number of setbacks in recent years, from corruption scandals to lost spacecraft to an aborted take-off during a manned mission in 2018.

Moscow and Beijing unveiled plans in March for the construction of a joint lunar space station.

The ISS is expected to be retired before the end of the decade, raising questions about future cooperation between Russia and the West in space.

Where Did Christopher Columbus Come From? DNA Study Aims To Discover