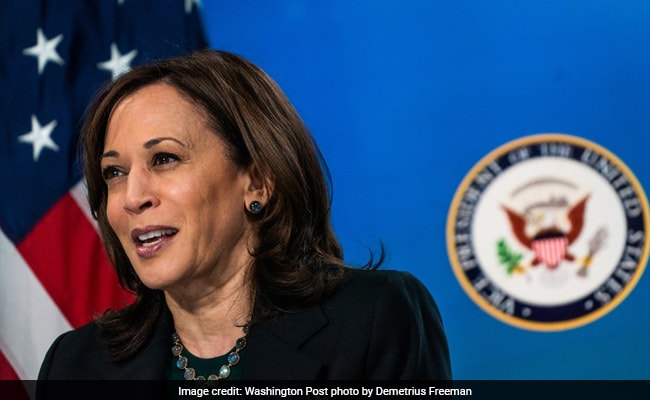 The article falsely claimed Harris’s book was being handed out to migrant children in California. (File)

A longtime New York Post reporter said she has resigned after being “ordered” to write a false story that claimed undocumented minors were being welcomed to the United States with copies of a children’s book written by Vice President Kamala Harris.

“The Kamala Harris story – an incorrect story I was ordered to write and which I failed to push back hard enough against – was my breaking point,” Laura Italiano tweeted Tuesday afternoon, several hours after her viral article about the books had been deleted from the Post’s website and replaced with corrected versions.

Italiano, who has written for the Post since the 1990s, according to news archives, could not be immediately reached for comment.

Since the Post published the story on its front page Saturday, the conservative mediascape has been in an uproar over the supposed distribution of Harris’s 2019 book, “Superheroes Are Everywhere,” at migrant shelters. A slew of prominent Republicans expressed outrage over the possibility that taxpayers were funding the program. Even the White House press secretary was grilled about it.

And then on Tuesday, in a one-sentence note at the bottom of the original online article, the Post acknowledged that almost none of it was true.

“Editor’s note: The original version of this article said migrant kids were getting Harris’ book in a welcome kit, but has been updated to note that only one known copy of the book was given to a child,” it read in full.

In fact, it’s not even clear whether a child actually received that single copy of the book, which was photographed by Reuters on a vacant bed at a shelter in Long Beach, Calif., last week. It was one of many items, including toys and clothing, donated by residents in a citywide drive, Long Beach officials said. No government funds were used to purchase the items, according to a city spokeswoman.

Italiano originally reported on Friday that “unaccompanied migrant kids brought from the U.S.-Mexico border to a new shelter in Long Beach, Calif.,” would be given a copy of the book “in their welcome kits.” Her story attributed this claim to the Reuters photo, and the Post spun it into an all-caps pun for the front page of its print edition: “KAM ON IN.”

A follow-up story by a different New York Post reporter on Monday reported that “thousands” of copies were being given to the children, and that White House press secretary Jen Psaki had “no answers” when asked whether Harris was profiting from the purported giveaways.

A follow-up story that falsely claimed “migrant children have been given copies” of the book retained that line as of Tuesday afternoon, even after the correction note was added.

The New York Post’s representatives, including digital editor Michelle Gotthelf, did not respond to requests for comment.

The correction came too late to prevent a chain of misinformation on conservative news outlets and social media, stemming from the original report.

A Fox News story published online over the weekend was corrected Tuesday to note that only one donated book was known to exist. But it still alleged that “the inclusion of the book raises questions over who is providing funding for the welcome packs.” (It was the second high-profile correction for Fox News in about 24 hours. On Monday, the network walked back a false report that President Joe Biden intended to restrict consumption of red meat.)

A Fox spokeswoman did not provide an initial comment about the children’s book story. The network is controlled by Rupert Murdoch, who also controls the New York Post.

Conservative lawmakers and GOP party officials also made hay out of the children’s book story in the four days it remained online and uncorrected. Sen. Tom Cotton of Arkansas and Rep. Jim Jordan of Ohio both blasted it. And Republican National Committee chair Ronna McDaniel tweeted: “After learning officials are handing out Kamala Harris’ book to migrants in facilities at the border, it’s worth asking . . . Was Harris paid for these books? Is she profiting from Biden’s border crisis?”

Late Tuesday, Italiano expressed regret about the circumstances leading to her departure. “It’s been a privilege to cover the City of New York for its liveliest, wittiest tabloid – a paper filled with reporters and editors I admire deeply and hold as friends,” she wrote in her resignation tweet. “I’m sad to leave.”