Police Employee Stabbed To Death At Station Near Paris

Police Employee Stabbed To Death At Station Near Paris 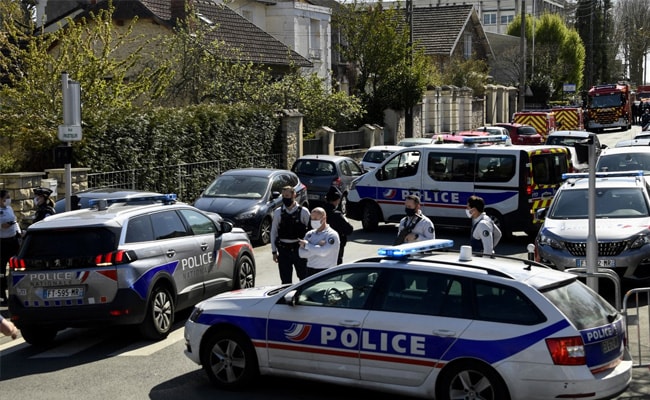 A female police employee was stabbed to death in France.

French police arrested three people Friday after a female police employee was stabbed to death at her workplace southwest of Paris by a suspected Islamist extremist from Tunisia who was then shot dead by the security forces.

A judicial source said the three were part of the suspect’s “entourage”.

President Emmanuel Macron said France would never give in to “Islamist terrorism” after the attack at a police station in Rambouillet, a tranquil commuter town about 60 kilometres (40 miles) from Paris, which revived the trauma of a spate of deadly attacks last year.

A source close to the inquiry told AFP the attacker shouted “Allahu Akbar” (God is Greatest) during the attack.

Chief anti-terror prosecutor Jean-Francois Ricard, who spoke outside the station along with Prime Minister Jean Castex, confirmed “comments made by the assailant” indicated a terror motive.

The 49-year-old woman, an administrative assistant and mother-of-two who was returning from a lunch break, was stabbed in the throat twice and died of her wounds shortly afterwards, the source said.

The attacker, 36, identified only as Jamel G., was fatally wounded when an officer opened fire on him.

He arrived in France illegally in 2009 but had since obtained residency papers, a police source said, adding that he was unknown to security services. He had just moved to Rambouillet.

About 30 police officers wearing balaclavas raided the suspect’s home in Rambouillet on Friday evening, AFP reporters at the scene said.

At the same time police searched the home of the person who sheltered Jamel G when he first arrived in France, sources close to the inquiry said.

Macron vowed on Twitter that “in our fight against Islamist terrorism, we will never give in”, identifying the murdered woman as Stephanie.

“The nation is by the side of her family, her colleagues and security forces,” he said.

Interior Minister Gerald Darmanin, who also visited officers in Rambouillet, said security would be stepped up at stations nationwide.

Several attacks over the last year have reignited concerns about the spread of radical Islam inside France as well as immigration.

In September, a Pakistani man wounded two people with a meat cleaver outside the former offices of satirical magazine Charlie Hebdo, which had printed cartoons of the Prophet Mohammed.

On October 16, a young Chechen refugee beheaded teacher Samuel Paty who had showed some of the caricatures to his pupils.

And on October 29, three people were killed when a recently arrived Tunisian went on a stabbing spree in a church in the Mediterranean city of Nice.

In the most serious recent attack against French police, three officers and one police employee in Paris were stabbed to death in October 2019 by an IT specialist colleague who was himself then shot dead.

He was found to have shown an interest in radical Islam.

These attacks came after the massacres carried out by Islamist extremists from 2015 that began with the killing of staff in the offices of Charlie Hebdo in January that year.

In France’s deadliest peacetime atrocity, 130 people were killed and 350 were wounded when Islamist suicide bombers and gunmen attacked the Stade de France stadium, bars and restaurants in central Paris and the Bataclan concert hall in November 2015.

The next year a man rammed a truck into a Bastille Day crowd in Nice in 2016, killing 86 people.

Just a few weeks before, in June 2016, two police officers were stabbed to death at their home outside Paris by a man claiming allegiance to the Islamic State group.

Macron’s government has introduced legislation to tackle radical Islamist activity in France, a bill that has stirred anger in some Muslim countries.

Nothing “Conclusive” On India-Dominant Variant To Delay Reopening:…