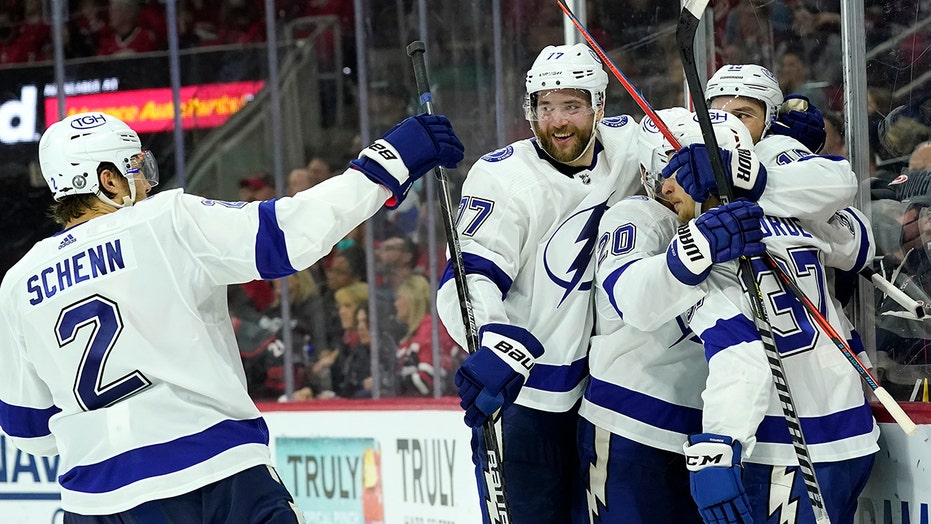 Andrei Vasilevskiy turned away almost everything, while Barclay Goodrow came through with an opportunistic go-ahead goal midway through the third period.

And just like that, the Tampa Bay Lightning responded to another road environment with the confidence forged amid last year’s Stanley Cup championship run.

Goodrow beat Alex Nedeljkovic at 12:39 of the third period and Vasilevskiy had 37 saves, helping the Lightning beat the Carolina Hurricanes 2-1 on Sunday night to open their second-round playoff series.

Brayden Point also scored for the Lightning, who weathered a high-energy start from Carolina and continued the Hurricanes’ postseason frustrations on the power play.

Vasilevskiy was the key in both. He had 15 saves in that first period with the Hurricanes buzzing out of the gate backed by a rowdy home crowd of more than 16,000. Carolina also went 1 for 5 on the power play.

“He can just track the puck so well,” defenseman Ryan McDonagh said. “Never gives up on a puck and just stays to his strengths out there. … We know he’s a big backbone back there.”

The Lightning swept the first two games at Florida in their six-game first-round series, then handed Carolina its first postseason home loss after its six-game series against Nashville. Game 2 in the best-of-seven series is Tuesday night.

Goodrow’s winner came when he headed left against Carolina defenseman Brady Skjei, then shot from a sharp angle on the left side. Nedeljkovic dropped down but left space between his pad and the post — and the puck slipped through to break the 1-1 tie.

“The puck had eyes, obviously,” Tampa Bay defenseman Victor Hedman said. “But good things happen when you shoot the puck. That was a good example of it.”

It was a mistake for Nedeljkovic in another otherwise strong performance with 28 saves.

“It’s no use hiding it … it was a bad goal,” Carolina coach Rod Brind’Amour said. “He made a lot of good saves tonight, too. That’s part of it. We’ll bounce back and he’ll bounce back. We’ve got to score more than one to win anyway. That’s the way I look at it.”

That lead held, with the Lightning holding off Carolina’s final minute with the empty net and extra attacker in a desperate tying attempt.

Jake Bean scored on the power play to tie it early in the third for Carolina, which entered with home-ice advantage after winning the Central Division.

This marked the sixth time in seven playoff games that Carolina has surrendered the first goal.

“I think we have another level,” Bean said, adding: “We knew this wasn’t going to come off without any kind of adversity.”

Tampa Bay didn’t have defenseman David Savard due to an upper-body injury. Then the Lightning saw fellow blue-liner Erik Cernak go down when he got sandwiched between Carolina’s Andrei Svechnikov and Victor Trocheck in a collision near the boards at 18:15 of the second.

Cernak eventually got up and skated slowly to the tunnel, leaving the Lightning with five defensemen.

Coach Jon Cooper said Savard is considered day to day, while he expected Cernak would be OK.

Carolina winger Nino Niederreiter sat out with an upper-body injury that forced him to leave Saturday’s practice early. At the time, Brind’Amour said he didn’t anticipate it being a problem even as he listed Niederreiter as questionable.

But on Sunday night, Brind’Amour said Niederreiter was “very, very doubtful” to return for this series. That’s a significant blow for Carolina’s offense considering Niederreiter had 20 regular-season goals and one during the Nashville series.

Niederreiter’s absence opened space for Cedric Paquette to make his playoff debut for Carolina — and against the franchise where he played from 2014-20.

The NHL had approved an increased attendance for PNC Arena with the installation of a 500-ton chiller to increase air flow while ensuring integrity of the ice despite the rising temperatures outside.

Carolina had about 5,000 fans to close the regular season, then upped that to about 12,000 for the Nashville series after the state eased COVID-19 restrictions. The official figure for Games 1 and 2 of this series is 16,299, roughly 87% of the building’s normal 18,680-fan capacity.

David Ayres — the Zamboni driver and kidney-transplant recipient who memorably won a 2020 game in Toronto for the Hurricanes as the emergency goaltender — sounded the storm-warning siren for the Hurricanes to take the ice for the third period.