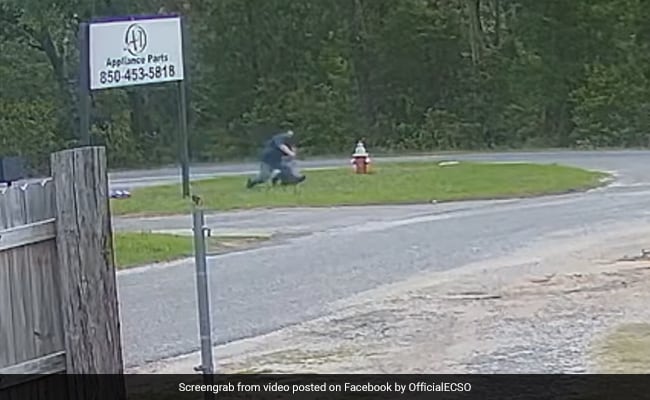 Police said the suspect will be charged with attempted kidnapping

A shocking video – which shows a man trying to kidnap an 11-year-old girl from a bus stop in Florida in the United States on Tuesday – has emerged online.

As the man, who was armed with a knife, approaches her, the young girl tries to run away. The man manages to grab her, and is carrying her back to his vehicle, when the two fall to the ground. At this point the girls fights and breaks free, while the man runs back to his SUV and drives away.

The police arrested the man after releasing the video, which they used to track down his address by identifying the vehicle, and asking the public for help to locate him. At the time of his arrest, the 30-year-old suspect was wearing the same clothes he wore during the incident, the police said.

The authorities said the suspect will be charged with attempted kidnapping with aggravated assault with a knife. He reportedly has an extensive criminal history, including sexual offences with a child.

The authorities also said they will be withholding his identity at this time.

The young girl, who is being hailed as a hero, is safe and with her family. The suspect allegedly approached her two weeks ago as well, at which time she had told her parents about him.

“Thank goodness she was paying attention and put up a fight. I pray this sicko is caught & meets justice. Thank you for sharing to bring awareness. We never think this can happen to any of us and how quickly our lives can change in a matter of seconds. It really makes you think! Going to show my kids when they come home,” she wrote.