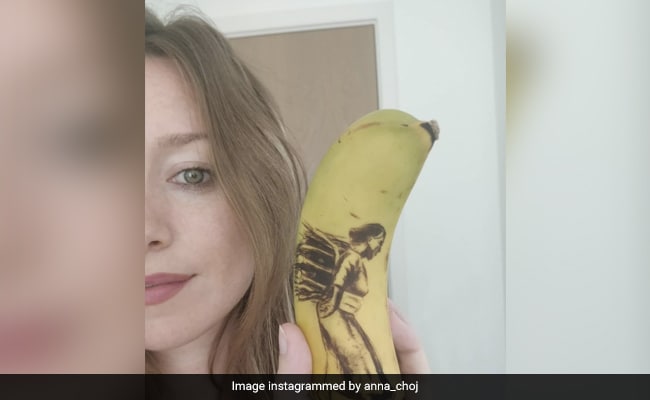 Anna Chojnicka was bored as she quarantined last year in her London apartment because of a suspected case of covid-19. She was so bored that she absent-mindedly picked up a banana on her kitchen table and started running her fork along the outside of the peel.

The dark lines that appeared on the peel looked interesting to her, and she watched as the marks gradually got darker. She continued doodling and was soon fascinated. She drew eyes, a nose and a mouth and – satisfied with how it looked – decided to see how far she could go with it.

She drew an abstract pattern, then a profile in shadow.

Chojnicka, 35, started making pictures that were more and more intricate using the same method – only pressure, no paint – until she sketched an Ethiopian coffee pot and cup. Her new hobby was born.

“This is a bizarre symptom of the pandemic . . . creating banana art,” she said, acknowledging her unusual medium.

Since that first day she figured out what she can do by bruising a banana peel, Chojnicka has been posting her daily creations on Twitter and Instagram, where she has thousands of followers.

“I haven’t missed a day, but I know I can’t keep that up forever,” she said, adding that she inspects her daily sketch, takes a photo and then eats the banana – she doesn’t like waste.

Her popular banana art ranges from familiar cartoons such as Homer Simpson (which she cheekily labeled “self portrait”) to painstakingly rendered portraits of people such as Greta Thunberg. She does puns, like a zipper around a partially peeled banana. She is often inspired by current events, such as the coronavirus vaccine drive. She recently made one with the slogan “Empowered women empower women,” nestled in a yin-yang of two women in profile.

“Bananas have a really beautiful way of going from yellow to black by way of gold, orange, and brown,” said Chojnicka, who liked art as a child but hadn’t practiced it much as an adult until last year. “Some of it almost looks pink.”

Her art comes to life by oxidization. Just like apples, bananas oxidize, or turn brown, as the enzymes in their cells are released and interact with the oxygen in the air. Cells that are damaged – because they’ve been poked with a fork or dropped on the floor – brown faster. By varying when she applied the marks, Chojnicka discovered that she could create a palette of shades, resulting in surprisingly intricate pictures.

While her banana sketches began as a way to stave off boredom, they have become something bigger.

“I saw an opportunity to put it to some good,” said Chojnicka, whose day job is working for a company that supports local businesses focused on social or environmental issues.

With the help of her social media followers, she has raised about $1,600 for FareShare, a charity in the United Kingdom that provides food to people in need. Admirers, moved or just amused by Chojnicka’s art, have donated to the organization through the fundraising site JustGiving.

Once she realized her fruity art had a following, she decided to branch out into other causes close to her heart. She helped bring attention to the Grand Ethiopian Renaissance Dam, which aims to address the country’s energy shortage. She felt close to that project, she said, because she worked in Ethiopia for four years and said the dam “has the potential to lift people out of poverty.”

The bananas that she sketched for the cause received a big response, she said, and appeared on a local television station. She also was the subject of a 60-second documentary on YouTube.

Chojnicka said she enjoys connecting with people who come across her art on social media and says there’s even an emerging community around her creations.

Among her most popular pieces was a banana she made in February scrawled with the word “banana” in different languages. “What language(s) do you speak? Do you see your language here?” she asked in a caption on the post. Responses flooded in from all over the world: Brazil, the United States, South America, Africa, Asia and Europe.

The post ended up “sparking separate conversations between people around the commonalities in their languages,” Chojnicka said.

“I’ve done a workshop for a charity recently that supports elderly community members who are often in isolation and suffering from loneliness,” she said.

The activity, she noted, has both social and therapeutic components: You’re bruising the bananas together, “but you can also use the time to just talk and have a chat, and it develops mindfulness and creativity.”

Experts have long agreed that art is good for mental and physical health.

Meg Chisolm, a psychiatrist at Johns Hopkins and author of the book”From Survive to Thrive,” said art in almost any form promotes happiness.

“When you’re creating art, you get into that flow state that actually takes you out of yourself a little bit, which allows you to be more centered and less stressed,” she said.

Research shows that cortisol, the body’s stress hormone, decreases when a person is engaged in art. This is true even for people who are appreciating art rather than creating it.

“For some people, making art is a very anxiety-provoking experience, where they feel like they’re not competent,” Chisolm said.

Chisolm said she was tickled by Chojnicka’s ingenuity, comparing it to other creative projects during lockdowns – like focaccia bread decorated with herb wildflowers or sourdough rounds scored with scrollwork.

“During the pandemic, people are using the tools they have at hand and looking at things they see every day in a new way,” she said.

Chojnicka said she realizes that bruising a banana to make a sketch isn’t everyone’s thing.

But for anyone who might want to give it a try, she has a few tips.

First, you need a banana and a tool to bruise – not pierce – the peel. These days, Chojnicka relies on a seam ripper, an instrument used by sewers to rip out stitches. But any blunt point, such as a comb or a toothpick, will work.

Chojnicka recommends starting with a relatively simple image with at most three shades. Draw the darkest part first, “which quite often will be the outline to whatever your image is,” she explained.

Leave that to turn as dark as you want it – even letting it sit overnight – before moving on to your middle shade. The lightest shade will come last. When you’re satisfied with the drawing, take a picture fast. Because the banana continues to brown once the peel has been damaged, often the image can look quite different within minutes.

The banana’s ripeness can also affect the final picture.

“Softer bananas tend to be more even in how they bruise, so you can do things that look almost blended,” she said. On the other hand, the bruising in harder bananas yields a more mottled, almost grainy effect.

Experimenting can be fun, especially if you enjoy snacking on bananas. One of the best things about it, she said, is that there’s no fancy equipment involved.

“Literally, banana bruising is a banana and a point. Anyone can do it,” she said.

“It Looks Like A Threat”: US Senators Question Apple, Google’s Actions